Indeed said that the UK is lagging behind in job recovery, as EU jobseekers are looking to options in Ireland instead.

Ireland is already seeing a boost for employers on the back of Brexit, according to jobs site Indeed. The company said that UK job recovery is lagging behind Ireland, although that may change as vaccine roll-outs continue.

Indeed’s research suggests that EU jobseekers are showing more interest in Ireland-based roles after Brexit. It found that media, pharmacy and the social sciences are all sectors in high demand, potentially because EU citizens are finding it harder to obtain work visas under the UK’s new immigration policy.

For media and communications roles, Indeed said that clicks on its site from people across the EU looking for work in Ireland had increased by 3.4pc compared to the same time last year. Clicks for similar roles in the UK fell by 0.2pc. 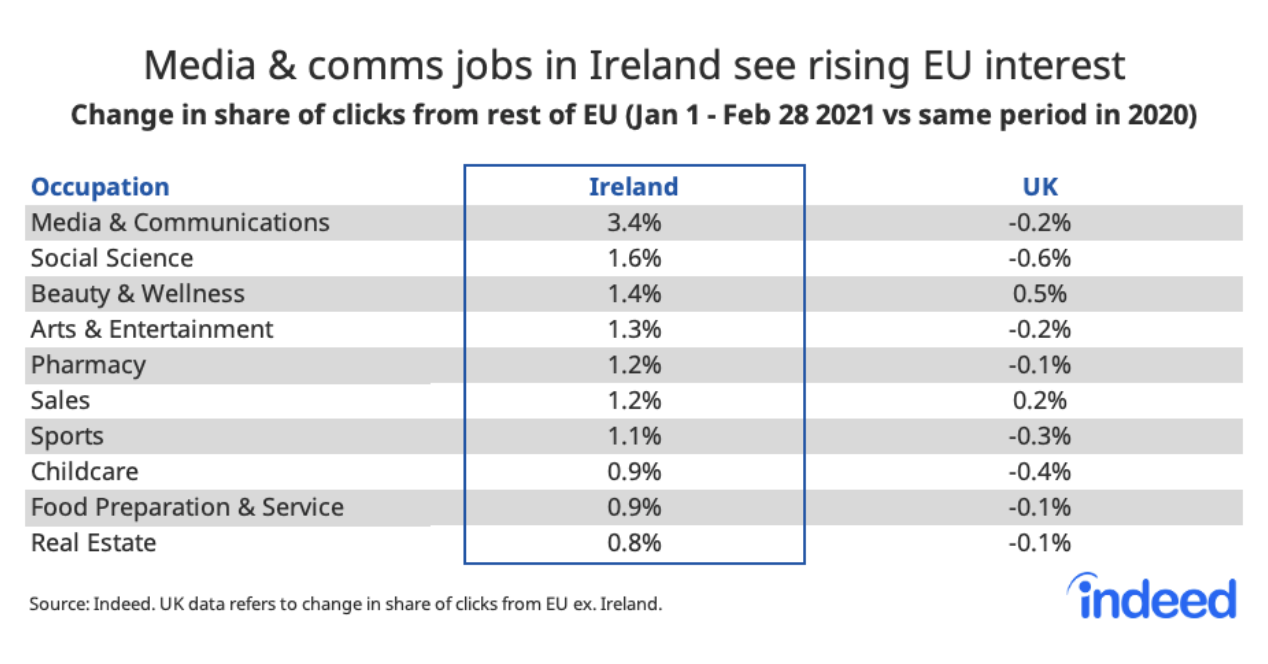 The company said search patterns indicate that Ireland has retained its attractiveness to EU jobseekers at a time when the UK is seeing waning interest.

Job postings on Indeed’s UK site are down by 36pc since February 2020, compared with a drop of 24pc in Ireland.

“Brexit was a somewhat overlooked event in an extremely tumultuous year, although it has potential to have even longer lasting effects on the Irish labour market,” Jack Kennedy, an economist at Indeed, commented.

“With the UK’s migration policy pivoting post-Brexit, Ireland may stand to benefit. Sectors like media and communications, linguistics, the arts and beauty and wellness are seeing rising interest from EU jobseekers who may have previously been drawn to the UK.

“Looking at the hoped-for recovery and jobs market post Covid, data shows job postings in Ireland are down less than the UK compared to a year ago. However, the faster pace of the UK vaccination programme may see its labour market recover quicker in the coming months.”

83pc of Irish workers reluctant to return to offices, survey suggests
How to write a CV for a job in software development
How this company used tech and thoughtful planning to onboard staff
Mainstream Renewable Power to create 100 jobs at new Dublin HQ