What happened when Finland trialled a basic income scheme?

The results of Finland’s two-year basic income experiment have been published, providing insights into the effects of a flat, monthly, government-backed payment for unemployed people. The findings showed minor impacts on employment rates, but recipients of basic income had a “perception of better mental and economic wellbeing”.

The experiment was put in place by the Finnish government and Kela, its social security organisation. The scheme ran from 2017 to 2018 and offered 2,000 people – randomly selected from a pool of 175,000 unemployed people – €560 each month.

Participants were under no obligation to find a job during this period, and saw no reduction in their payment if they received work. The monthly sum was tax-exempt and was not affected by any other income the recipients may have.

There was also a control group consisting of people who had received an unemployment benefit from Kela in November 2016, but were not selected for receiving basic income. 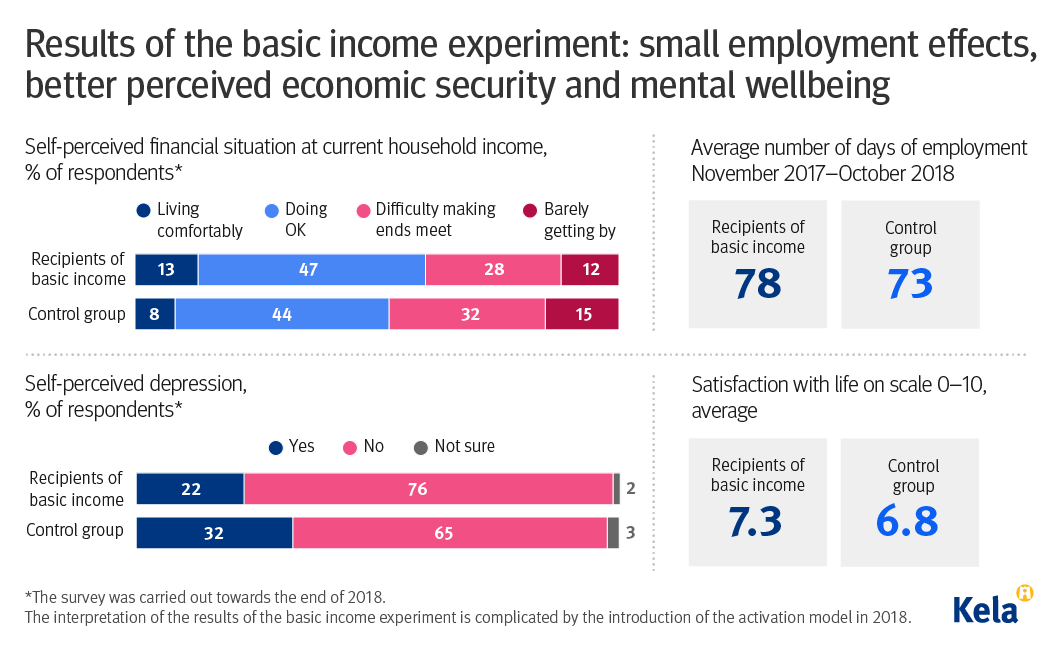 According to Kari Hämäläinen, chief researcher at Finland’s VATT Institute for Economic Research, the impacts of the basic income on employment levels were “small”, suggesting that “for some persons who receive unemployment benefits from Kela, the problems related to finding employment are not related to bureaucracy or to financial incentives”.

The evaluation also focused on the mental and economic wellbeing of the experiment’s participants. Those who took part in the basic income initiative were spoken to on the phone just before the experiment ended, and described their wellbeing “more positively” than respondents in the control group.

The report said that they were “more satisfied with their lives” and experienced lower amounts of depression, sadness, loneliness and mental strain. Participants also observed a better perception of their cognitive abilities, including memory, learning and ability to concentrate.

“In addition, the respondents who received a basic income had a more positive perception of their income and economic wellbeing than the control group,” said Minna Ylikännö, head of the research team at Kela.

“They were more likely to find that their financial situation is manageable and that they are protected financially.”

Based on the 81 participants who were interviewed at the end of the experiment, the study said that, for some, it offered “new opportunities of participating in society”, including voluntary work or informal care. A stronger feeling of autonomy was also reported, but others experienced heightened pressure to find a job.

The government also highlighted the experiment as “the world’s first basic income experiment that was nationwide, statutory and based on a randomised field”, and in which participation was not voluntary. It said that this allowed “more reliable conclusions” to be taken from the study.

Olli Kangas, programme leader at the Strategic Research Council at the Academy of Finland, added: “The implementation of the experiment was successful, and it provided new information that would not have been available without the experiment. It also showed that in Finland, the arranging of extensive social experiments is possible from a legislative viewpoint.”

Could you win this game of remote-work bingo?
Skills-matching platform Abodoo launches free trial for employers
Learn circus skills, laughter yoga and gardening while you stay at home
You don’t need to be overworking to suffer from burnout