Which industries are busy hiring for Brexit-related roles?

New research from Indeed suggests that law, finance, supply chain and internal communications are among the job sectors currently hiring on the back of Brexit.

Today (10 March), job site Indeed published new research suggesting which sectors are on busy hiring for Brexit-related roles in both the UK and Ireland.

By analysing job postings on the site mentioning Brexit, it found that law, finance and healthcare job descriptions are the most likely to reference it.

Due to “border uncertainty”, the company said, it also found frequent mention of Brexit in postings for supply chain jobs, including customs, shipping and quality assurance.

The reasons for referencing Brexit in these sectors, Indeed explained, is their relation to service industries that are “likely to be heavily affected” by the UK’s withdrawal from the EU.

UK lawyers have been registering to practise in Ireland since the referendum took place in 2016, the company added, as have financial services professionals such as financial reporters, market surveyors and auditors.

Internal communications roles have also been mentioning Brexit at a higher rate than other sectors, Indeed reported. It cited company restructuring as a potential factor in this, as such upheavals require increased information sharing and, as a result, must start hiring for additional resources.

Indeed stated that in October of last year, job postings mentioning Brexit peaked at 741 per million – up from 331 per million in March – which it linked to the January 2020 deadline for the UK’s withdrawal. 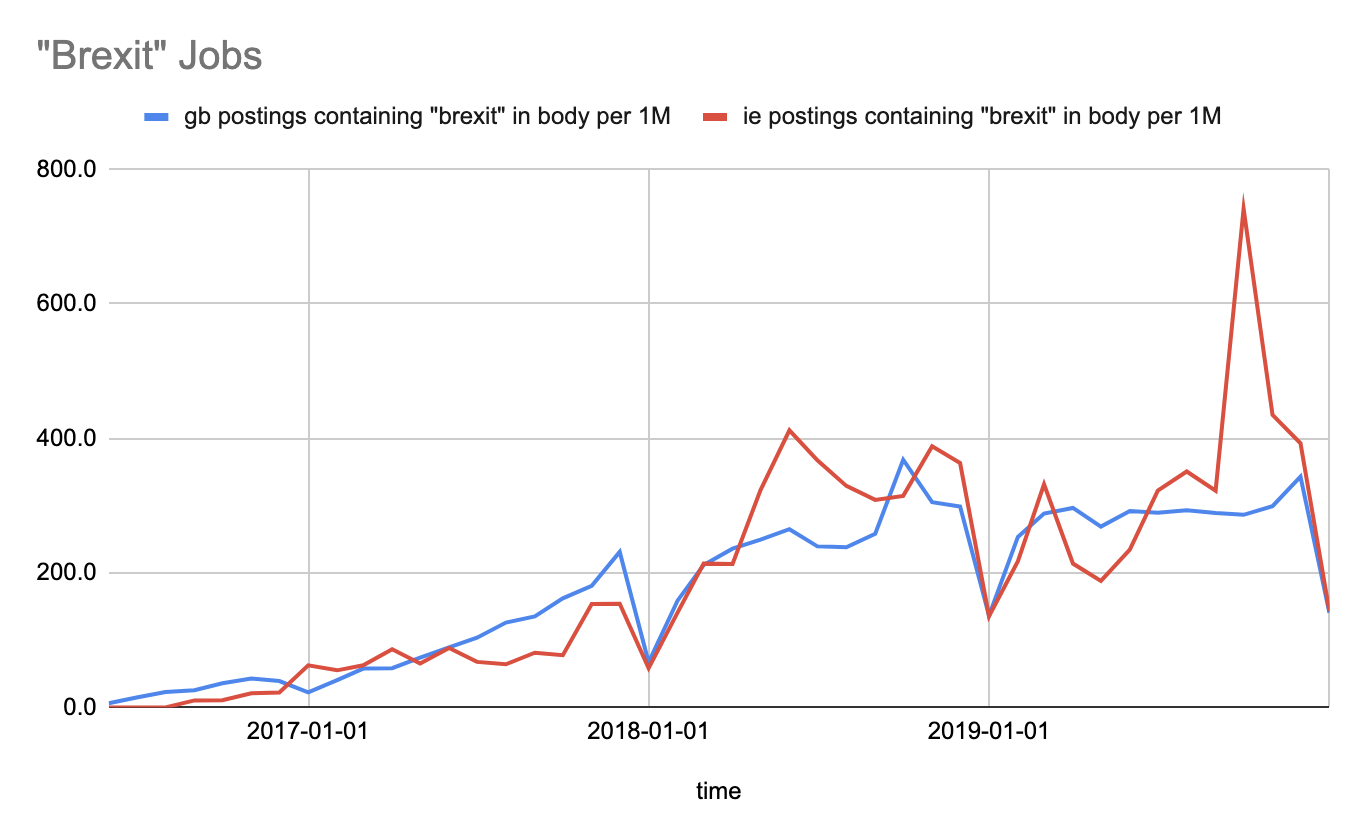 Pawel Adrjan, economist at Indeed and head of EMEA research at the company, said that despite many fearing “negative employment effects of a bad Brexit”, it has in fact “created a need for some jobs to be adapted, or for new roles to be created entirely”.

“As companies ask their financial and legal teams to deal with the potential impact of Brexit, it’s no surprise that skills and responsibilities related to Brexit planning make their way into job descriptions,” Adrjan said.

“Some employers are leveraging Brexit uncertainty to attract UK-based candidates to jobs in healthcare and construction. Our previous research with the Central Bank showed that those sectors suffer from a particular shortage of candidates and it makes sense for recruiters to target anyone they can.

“We’ve seen this happen before in other areas where a specialised labour force is particularly in demand. For example, when Thomas Cook ceased trading in the UK last year, other travel operators targeted the company’s former employees by mentioning Thomas Cook in their job postings, and even setting up accelerated recruitment pathways overnight to attract workers with a particular skillset.”

4 supports that can help employees outside of work
How HR teams can leverage employee data for better retention
Unconscious bias: The trouble with using AI in the recruitment process
These are the benefits of a neurodiverse workforce